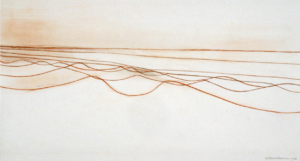 Ekphrastic has come to mean any writing – prose or poetry – in any form – which uses art as its stimulus.  The art can be a painting, drawing, sculpture, or any other form of visual art.

The term ekphrastic comes from a Greek expression for description and the earliest ekphrastic poems were vivid accounts of real or imagined scenes.

For example in The Iliad by Homer Homer (who was possibly blind), Homer wrote an imaginary description of the shield of Achilles, fashioned by the god Hephaestus

Hee fee stus / Heph est us to include the earth, the heavens and the sea, as well as scenes of human endeavour and strife. He writes that the shield depicted two cities, one besieged by foes, scenes of planting and harvest and tableaux of dancing maidens and youths.

A well-known example of an ecphrastic poem is John Keat’s poem,  “Ode on a Grecian Urn” where he speculates on the dancing figures and the musicians on an imagined urn:

“What men or gods are these? What maidens loth?
What mad pursuit? What struggle to escape?
What pipes and timbrels? What wild ecstasy?”

Though, obviously, the maidens may well not have shared this opinion.

An example of where a traditional, male, view has been turned around is in Ursula Askham Fanthorpe’s peom  Not My Best Side is based on the thoughts of the maiden about to be sacrificed to the dragon, but rescued by St George in the medieval painting by Paolo Uccello of  “Saint George and the Dragon,”

Here, the poet has the maiden saying:

“It’s hard for a girl to be sure if
She wants to be rescued. I mean, I quite
Took to the dragon. It’s nice to be
Liked, if you know what I mean.”

One of my, and many people’s favourite ekphrastic poems is In the Musée des Beaux Arts  by WH Auden

It describes Pieter Brueghel’s painting Landscape With the Fall of Icarus.

The poem with a powerful observation about how one person can be experiencing a devastating tragedy, while someone close by is just getting on with their humdrum day:

About suffering they were never wrong,
The Old Masters: how well they understood
Its human position; how it takes place
While someone else is eating or opening a window or just
walking dully along

…and then Icarus’ fall to the sea;

In Breughel’s Icarus, for instance: how everything turns away
Quite leisurely from the disaster; the ploughman may
Have heard the splash, the forsaken cry,
But for him it was not an important failure; the sun shone
As it had to on the white legs disappearing into the green
Water

Rosie Jackson and Graham Burchell’s Two Girls and a Beehive is a new book of poems based different paintings by Stanley Spencer and Hilda Carline Spencer. Rosie will be on the programme next month and we’ll look forward to talking with her about how she developed her ekphrastic response from the Spencers’art.

Here in Frome, Words at the Black Swan – is a a drop-in writing group which, until lockdown, met – with a lead poet – in the Long Gallery on the Monday after each exhibition launch, to respond to the work in the new exhibition.

So – Art is a brilliant stimulus for poetry and there are many, many examples of ekphrastic poetry and is an approach very much used by some contemporary poets.

But – Ekphrasis can also a really successful approach to fiction writing.

There are many, many examples of where an artist, painting or art movement are at the core of a work of fiction:

The Picture of Dorian Gray by Oscar Wilde is based on an imaginary painting done of Wilde’s fictional character, which starts by delighting Dorian and changes as the story develops.

Artist of the Floating World by Kasuo Ishiguro – an exploration of post war Japanese art and the political and artistic conflicts of the time – based on artistic styles rather than one particular painting.

The Birth of Venus by Sarah Dunant

To recreate the past as a living the author visited, museums and art galleries all over Italy and has described how the decoding of old paintings, as well as the work of modern historians, helped her to penetrate the hidden world of the Renaissance

To the Lighthouse by Virginia Woolf (1927)

In a summer when various guests come to stay with the Ramsays and their children, one guest, Lily Briscoe, begins a painting featuring Mrs Ramsay. Ten years later, after Mrs Ramsay’s death, Lily returns and completes the painting.  In the process she finds a way back into her memories of that summer and realises how Mrs Ramsay could make “life stand still” as an artist does.

Girl With a Pearl Earring by Tracy Chevalier (1999)

Chevalier was inspired by the intensity of the sitter’s gaze in Vermeer’s painting and created the story of Griet, a servant girl who became close to her artist employer, and – through her – explores Vermeer’s work and Dutch art scene of the 1660s

This book is based around the painting of The Goldfinch in the Metropolitan Museum of Art. The main character’s mother takes him to see the painting and moments later is killed by an explosion. Theo’s and the painting becomes the central themes of the book.

My Name is Red by Orhan Pamuk

A story from 16th-century Istanbul about the murder of a miniaturist who is working on a secret book for the sultan. Through this, Pamuk explores death, love and the nature of Islamic art

An ingenious code hidden in the works of Leonardo da Vinci and in which the Mona Lisa is a symbol of the sacred feminine.

Although this list may not be strictly ekphrastic, according to some people’s definition, they are all based on explorations into the world of art and artists.

A set of wonderful – and definitely – ekphrastic stories, which I read a long time ago and would highly  recommend are:

The Matisse Stories by AS Byatt

are three stories inspired by three different paintings by Henri Matisse, in which the main characters’ stories begin simply with a trip to the hair dresser, a passion for knitting, lunch in a Chinese restaurant but where feelings are explored as deeper layers are revealed.

Why not try some ekphrastic writing yourself?

You could take part in FWC’s  EKPHRASTIC STORY CHALLENGE?